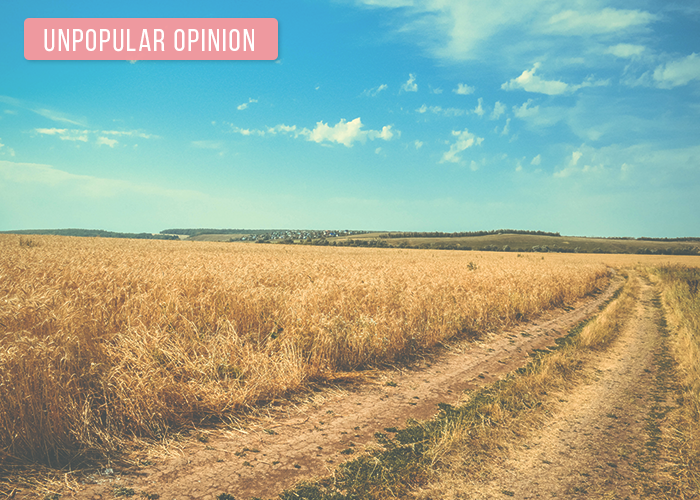 I love TFD. I started reading about a year ago, and I was spellbound. I had never seen such digestible reflections on finance before, especially in a space that is feminine and seemingly curated by humanities people. TFD’s articles and advice allowed me to begin improving my flawed relationship with money. However, many of the career-related articles I read on the site seem to assume certain things about the readership. I’ve often wondered, as I read, if there are other small-town TFD readers like me, who are drawn to the site but feel a bit disconnected to the urbanite office-worker default setting associated with adulthood and employment.

The money lessons that seem tailored to people in vastly different lifestyles from my own (I live in a small town and work a retail job with folks who don’t expect to move away, ambitiously climb the professional ladder, or travel the world) still apply to my own budgeting and my navigation of adulthood. Some of it just takes a little tweaking to fit. Here are a few of the assumed situations that pop up as I read TFD articles that I can’t relate to (and why the writing on this site is so valuable to me anyways).

1. Being in a situation where going out for drinks with people can pass, temporarily, as “networking.”

If you work in a corporate environment in a small town, you aren’t allowed to drink with higher-ups; drinking with your fellow retail employees offers no illusions that you will get anything from it but a drunken night and a hangover. The fact that this is an illusion that many young people in big cities are falling prey to and wasting hundreds of dollars on in the form of cocktails seems very Mad Men to me.

That being said, I still make up excuses to go to the bar with people. It’s just never a faux-professional venture. Instead, it’s a friendship bolster. And even though this article is written by someone whose lifestyle fits in with all the points that are irrelevant to my own job and lifestyle, the advice about finding something to do with new people in your life is totally apt.

Many blanket articles about being “more proficient at work” seem to focus exclusively on office culture. They reference salaries, conference calls, cubicles, and blazers. The fact that they call it “at work” instead of “specifically at office jobs” makes me feel out-of-touch with the work challenges they describe. I wear a uniform, I perform physical labor, and I get paid hourly. It’s still work. It still involves communication and planning. Large generations of families are raised and supported by the employees at non-office jobs, but our representation in finance blog culture is quite scarce.

That said, TFD know that no matter what your job is, income is income. If an article seems targeted at office workers, it can pose image issues for a reader who works in retail or service. But the main points about saving the income that you earn from your job and increasing your performance while decreasing your stress can still help you, even if getting a bouncy ball instead of a wheely chair isn’t an option.

3. Having friends who are doing more “adult” things than you, professionally, and feeling pressured by it.

My friends work in restaurants and grocery stores and the mall and coffee shops, or they’re unemployed. I don’t have to delete people from Instagram because their lives seem too perfect, because my Instagram is pretty much filled with people living on my level. However, I do still feel like I’m not measuring up to something. My own flavor of discontent is based on the fact that I think the world is telling me to be an urban socialite, even though “the world” is just an abundance of online media with a large urban-based audience.

The best thing to do when this kind of self-deception creeps up is to remind myself that what I need to do is understand the value of independence, financially, personally, and professionally. TFD has helped me do that. We’re all on the same, basic page: we’re all striving to be free from the restrictions of attaining a perfect image and are learning how to enjoy our imperfect lives.

Or any of the places where you know your favorite band is going to play when they go on tour. That’s my way of defining a big city: Are you 100% sure that if your favorite band is on tour, they will be playing at a venue at least 20 minutes away from you, at some point? If you answered yes, then you’re in a big, cool city. A lot of things don’t exist when you live in a remote, small suburb, like cool tour stops and big companies. That said, I remind myself that a lot of things don’t exist in big cities: Things like my entire family, or an existence free from the threat of earthquakes, or the fact that I can enjoy living in my own element, the countryside. I like having affordable, fresh produce on hand (Yeah, I saw that Broad City episode about the NYC co-op. Yikes.)

But, similar to New York City landlords, people in my part of rural America haven’t really embraced the idea of big, sprawling layouts for their $500-a-month tenants. I still need to fit stuff into a 300-square-foot apartment. This article is a great roundup that puts wildly different lifestyles on display for TFD readers to compare and contrast our spectrum of realities.

For me, those aren’t ever an option in the first place. It’s one thing to come home from a trip to Europe broke and scared of the financial repercussions. It’s another thing to live the kind of life where even the idea of paying for a passport seems a little much, let alone an entire trip. As a young adult longing for adventure abroad and doubting I’ll ever have it, the predicament of regretting a poorly-planned vacation seems like a good problem to have.

Sometimes the dark parts of life and personal finance remind me that I may never go on the life-affirming trips to the beautiful places that I promised myself as a young, romantic kid. But sometimes, TFD reminds me that if you unlearn all the cultural hype about how great travel is, it might not even be something you want.

If you live in a small town, Care.com and all the other community-based websites don’t really generate viable opportunities because there’s just nobody using them. Not every restaurant and bar is busy enough to net you a good amount of tip money, or hire anyone besides their own kids. And if you don’t have a 9-to-5, your hours are weekly and change at random, so getting a second job usually nets you the same amount of total working hours as you would have had initially (if you hadn’t cut your availability at your first job). There are long lists of potential side hustle opportunities posted all over the internet, but most are very obviously assuming that you live in a booming metropolis. Not everyone can sell tie-dye shirts and jewelry at the farmer’s market like the IRL side-hustlers I know in my neck of the woods.

But, whether it’s appreciating a not-so-amazing job or building your professional portfolio online, TFD writers have reminded me that there are still things you can do to improve your work life and pursue better job opportunities. As alluring (and then, for me, disappointing) as those lists of ways to make money can be, they’ve pushed me to a new realization: the important thing for me to do is take TFD’s lessons and apply them to my own situation. Thanks to the articles above, I’ve realized that there is always a way to expand my income; it’s just not necessarily going to be pre-packaged in a listicle ready for me to cut-and-paste into my life. There’s a lot to be said for finding your own hustle that’s unique to your own skill set and the needs of your actual town and surrounding community.

Rebecca Cina was born in New York and raised on the coast of South Florida. She studies creative writing at the College at Brockport and lives in Spencerport, New York.